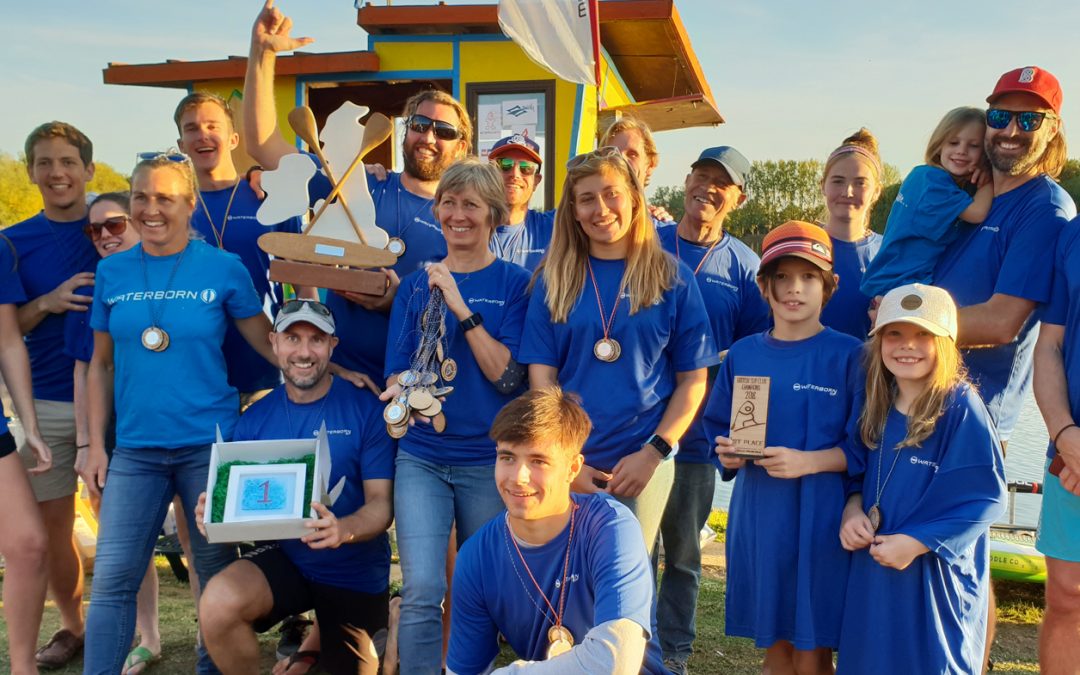 On Saturday 29 September 2018, 17 Stand Up Paddleboard (SUP) clubs from around the country converged on London to compete in the British SUP Club Championships. sent a team of 18 mixed ages and abilities to represent on the national stage. Clubs battled it out in multiple races to find out who will be crowned this year’s champions, managed to see off the tough competition and brought the trophy back to the shire claiming the title as National Club Champions!

The event focuses on clubs as a whole and competitors across all classes make a difference for the total points, so even those who have paddled just a few times can really make a difference. The main racing is split into technical and distance, the technical course focuses on multiple tight turns where the distance race covers an 8km course with fewer turns. As well as the conventional racing there is a strong focus on team relays and sprints and potentially this will be the route the sport takes as it looks to be involved in the Olympics in the future. narrowly missed the clean sweep for all of the team events beaten by a foot in the Dragon board race, piped by previous trophy holders BaySUP from Bournemouth. “The Dragon board is a 22 foot Inflatable SUP board raced by 4 people and requires the team to be well in sync to avoid spending time in the water, the dramatic close finish was fantastic to witness by all those watching in the warm September sun and is exactly what you want to see in racing”

There is also junior racing for those under the age of 18, and brother and sister Fleur and Ranulph Everitt aged 7 and 9 helped their club to victory.  would also like to build on the of juniors getting into racing and attending in the 2019 championships and are running regular junior club events over Easter to help further encourage juniors in the sport.

Waterborn’s owner Crispin Jones also mentioned “I am so proud of all the team, there was some seriously tough competition this year especially from some of the newer clubs but everyone gave their absolute all. Our location in the South Hams gives our paddlers plenty of diverse paddling opportunities, paddling in rivers, estuaries, lakes and SUP surfing and helps develops key skills. Our club attracts members from all over, though, our main catchment is from Plymouth through to Torbay. I run the club with a very open doors policy so as long as you can SUP independently you are more than welcome to join our sessions. Our most popular club session has to be the Women’s Social Paddle attracting around 30 – 40 ladies each fortnight but we also run Paddle and Pick sessions to reduce marine litter and fitness training sessions which have definitely helped with our newly acquired title”

If you would like to Stand Up Paddleboarding or develop your skills further why not give us a 07908 193 632 and learn from the top club in the UK. See you on the water!

This website uses cookies to improve your experience while you navigate through the website. Out of these, the cookies that are categorized as necessary are stored on your browser as they are essential for the working of basic functionalities of the website. We also use third-party cookies that help us analyze and understand how you use this website. These cookies will be stored in your browser only with your consent. You also have the option to opt-out of these cookies. But opting out of some of these cookies may affect your browsing experience.
Necessary Always Enabled
Necessary cookies are absolutely essential for the website to function properly. This category only includes cookies that ensures basic functionalities and security features of the website. These cookies do not store any personal information.
Non-necessary
Any cookies that may not be particularly necessary for the website to function and is used specifically to collect user personal data via analytics, ads, other embedded contents are termed as non-necessary cookies. It is mandatory to procure user consent prior to running these cookies on your website.
SAVE & ACCEPT